What breeds of dog do the Alaskan Klee Kai originate from?

The Alaskan Klee Kai breed originates from the Spitz family and is very similar to an Alaskan Husky dog.

What height do Alaskan Klee Kai Grow To?

The dogs usually grow to around a maximum height of 17 inches.

The Alaskan Klee Kai was developed in Alaska by Linda Spurlin and her family, to be a companion-sized version of the Alaskan Husky. From the early 70’s through 1988, the Spurlins carefully selected dogs who met their high standards for appearance and soundness.

The name was recognized by the United Kennel Club January 1, 1997.

The most distinctive characteristic of the Alaskan Klee Kai is the facial mask which must be clearly visible due to contrasting colors. The full face mask is the most desirable.

The Alaskan Klee Kai is a small version of the Alaskan Husky with a wedge-shaped head featuring a striking masked face, prick ears, and a double coat. The length of back is just slightly longer than the height. The tail is well-furred and curls over the back or to either side when the dog is alert or moving.

The Alaskan Klee Kai should look like a miniature husky. They come in three sizes based on their height:

Alaskan Klee Kai eyes can also come in variety colors. They can be blue, brown or green. You can have bi-eyed which is eyes of different colors like one blue, one brown. You can also get parti-eyed which is a mixture of two colors in one eye.  So you can have a blue eye on the top and brown on the bottom half of one eye.

The Alaskan Klee Kai is a highly intelligent, curious and active breed. Unlike Siberian Huskies, whom they closely resemble, Alaskan Klee Kai are typically standoffish and cautious around unfamiliar individuals, which causes them to excel as watchdogs.

Because of their inherently reserved disposition in the presence of strangers, continual socialization throughout their life is highly encouraged. They are moderately active so some daily exercise is recommended.

They do well in an apartment if you spend some time playing, walking or letting them play with other dogs. They can be a great family dog if raised with properly raised children.

This breed is likely to tolerate being mistreated (poked at, pinched, bullied) by children and may respond by nipping them. Even so, they make great pets.

Because of their intelligence they do well in obedience classes and have a high drive to please their owners which helps them to excel in this area as well as many other types of activities.

Another such activity is agility in which the AKK almost seems to have been bred to take part in. If you have an Alaskan Klee Kai that is highly active, this is a great way to help them use some of that up.

Because of their size, these dogs can live in an apartment, but a house with at least a small yard is recommended.

Your Mini Husky will be as active as you are. Whether it’s a ten minute walk, playing with you or another dog in the yard or a 5 mile jog the Alaskan Klee Kai  just wants to be with you.

The Alaskan Klee Kai is relatively easy to care for. They are extremely clean. Most do not like wet feet and will spend hours daily grooming themselves. Alaskan Klee Kai, like many other northern breeds, do not have a typical “doggy odor” or “doggy breath.”

Most Klee Kai will seldom require a bath. As in Siberians and unlike short haired dogs who shed all year long, the Klee Kai blows their coat twice a year. Of course, the size of the dogs limit the amount of fur blown. It is best to groom the dog on a regular basis during this time.

Some of the longer haired dogs can become matted if not groomed. Most will assist the loss of hair by rubbing against things such as fences.

Other than this period of blowing coat, the Klee Kai is very self sufficient. The normal preventative measures should be taken, such as trimming of nails, normal grooming in the form of brushing. This process is especially important in the bonding process

The Alaskan Klee Kai has a lot of Alaskan and Siberian Husky, as well as small amounts of American Eskimo in it.  They were developed in the 70’s and are a relatively new breed.  They were bred to be companions and their numbers are increasing.

How to Buy a Puppy 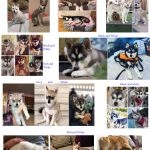 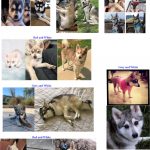 Keep an eye on my FB page to see all the puppies as they are born and grow, plus all my doggies as they enjoy life. The link is here.